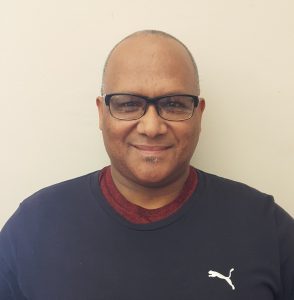 The Curatorium of URCSA at the Faculty of Theology, Stellenbosch University, examines again, at the end of this year, a few final-year students to be legitimized in order to be called as ministers by congregations. We would like to introduce them to you in the next few weeks. Last week it was Gragory Jacobs; this week we introduce to you John Hendry Majiedt:

It was during these years that his math teacher, Mr Nasson, and his parents had a major influence on his life; they were his most important role models. They continually motivated him to persevere until the end. “My parents taught me to be humble and that life is a gift from God,” he says.

After school, John went to study at the Bible School at Crawford and was qualified as a missionary. He later obtained a Diploma in Theology at the Evangelical Bible College in Port Elizabeth.

John was initially a member of the Dutch Reformed Mission Church in Gouda, but is currently a member of URCSA George. “A congregation belongs to God,” says John, “and my dream and vision for a congregation is to build and expand the Kingdom of God under the guidance of the Holy Spirit through prayer and love.” It is also important for him to create opportunities for congregation members to make an impact on society; a congregation must be committed to make a difference as people sent by Jesus Christ here on earth.

John undertakes to share his passion and enthusiasm with his congregation and to positively influence members to follow Jesus. He also strives to maintain good human relations. A love for God’s Word, prayer and caring for the needy within and outside the congregation is also of great importance to John.

John’s thesis deals with the research question: “How fundamental is Bonhoeffer’s thinking on Russel Botman’s theological and educational vision?”

This future minister not only enjoys the outdoors and wildlife, but he also loves photography, his dogs and the golf course!

John greatly appreciates his wife, Belinda, with whom he will be married for 21 years on the 23rd of August. She is currently paying for his studies and is also his prayer partner, anchor and loyal friend.

John will present his trial sermon on Sunday 14 October in George at URCSA Rosemoor Congregation. Contact him at [email protected] for more information.